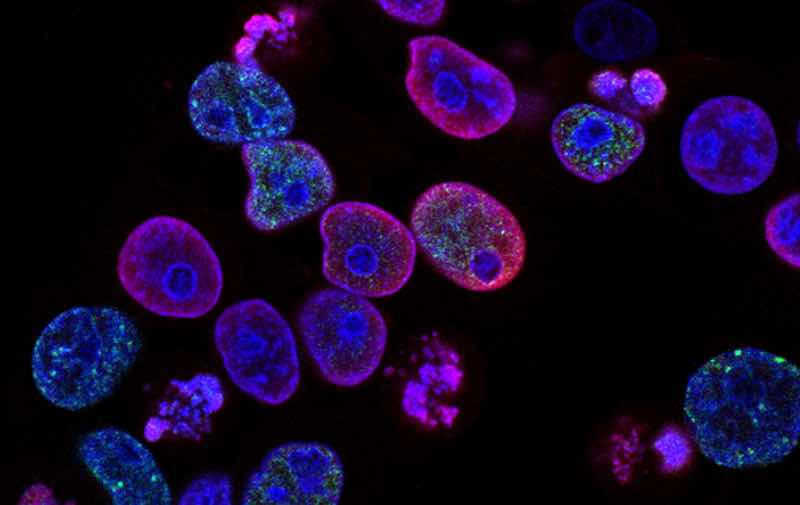 At its heart, cancer is the result of uncontrolled cell growth. Our bodies are composed of trillions of cells, all working together. In cancer, one of those cells stops paying attention to the normal signals that tell cells to grow, stop growing or even to die.

Cancer cells still share many of the same needs and properties of normal cells but they become independent of the controls that make our body function smoothly.

The process by which a normal cell changes into one that behaves so abnormally can take a long time and is often triggered by outside influences.

Cancer is actually a general term that describes a large group of related diseases. Every case of cancer is unique, with its own set of genetic changes and growth properties. Some cancers grow quickly while others can take years to become dangerous to the patient.

The many differences between cases of cancer, even of the same organ (i.e. different cases of breast cancer), is one of the main reasons that treatment is so difficult.

Despite the differences between different types of cancer, all cancers DO share some common features, and these shared properties are the basis for many cancer treatments and research efforts. It is important to understand the basic, shared, features of cancer.  This will allow for an understanding of detection, diagnosis and treatment options.

There are numerous changes that must occur for a normal cell to become a cancer cell.  Additional changes are needed for that single cell to form a group of cancer cells, called a tumor, and then for that tumor to grow and spread. Normal cells will not divide unless they receive outside signals that cause it to enter the cell cycle. These signals are detected outside the cell (on the cell surface) and sent into the cell.

They come from three different sources; growth factors (what tells a cell to grow), cell-cell adhesion molecules (what connects one cell to another), and extracellular matrix components (what exists outside of the cell).

Normally these signals, along with other factors, help control the growth of cells, preventing them from dividing uncontrollably. Cancer cells develop the ability to grow in the absence of these external factors and no longer obey the normal regulations on cell division.

They do this by, producing their own growth factors, alter their growth receptors to divide more, and even influence surrounding cells to produce growth signals. At this point cancer cells begin to behave more like independent entities living without regard for the organism as a whole.

Hallmarks Of Cancer: Failure To Respond To 'STOP' Signals

The division of normal cells is restricted by signals from other cells. Cells will stop dividing when they are in contact with neighboring cells. This cell contacts send signals into the dividing cells that cause them to stop dividing. An alternative mechanism to stop cell division is called differentiation. This is the process by which a cell shows different characteristics because it has a certain function.

An example of this would be the maturation of a stem cell to a fully mature colon epithelial cell. The maturation process involves the cells ability to express certain genes, which results in differential properties for the cells. While normal cells can only divide a finite number of times before stopping cell division and dying, cancer cells have the ability to divide endlessly without displaying the normal 'aging' seen in non-cancer cells.

In many cancers this is due to the activation of an enzyme, telomerase, that maintains the integrity of the chromosomes during cell division, keeping them functional and able to divide.

In normal tissue there is a balance between the generation of new cells via cell division and the loss of cells through cell death. Old cells become damaged over time and then go through a process called apoptosis, or cell death.

Apoptosis is a very orderly process in which the genome of the cell, all of its genetic information, is broken down, The cell is fragmented into smaller pieces and the debris is consumed by nearby cells that clean up the cell fragments (called phagocytic cells).

This process is normal and necessary for us to refresh our bodies with new and healthy cells. There are checkpoints built into the cell cycle that can recognize and eliminate the cells that are dividing in an abnormal way.

These checkpoints are responsible for preventing the development of cancer, since cancer cells develop and divide in a different way than normal cells. Cancer cells that get past these checkpoints have can avoid the cell death signals triggered by their abnormal behavior.

Avoidance of cell death, coupled with continued cell division leads to the growth of the tumor. Many of the chemotherapy drugs discussed in the Cancer Treatments section work by forcing the cancer cells to undergo apoptosis.

Hallmarks of Cancer: Getting a Blood Supply When a tumor becomes large enough where it needs to increase the supply of nutrients and oxygen it receives, it will create new blood vessels. This process is called angiogenesis. Low oxygen levels (hypoxia) trigger the tumor and its surrounding environment to release signals that result in the growth of blood vessels towards and into the tumor. These new vessels supply oxygen and nutrients that allow the tumor to continue growing.

Because the development of blood vessels is so important in tumor growth and is a target of some cancer treatments, we have created separate section on angiogenesis. The spread of cancer from its original location to other parts of the body is called metastasis. This is a critical event in cancer. About 90% of the death associated with cancer is due to disease that has spread. On this page, we present an introduction to the steps in metastasis of a cancer cell. Because of its importance, we have also created a section on how cancer spreads.

Into the Blood
Intravasion, or the process of gaining entry into the blood circulation, is the first step in metastasis.

To accomplish this, individual cells must move away from the primary tumor, which occurs through a change in molecules on the cell's surface that normally keeps it in place. These molecules are called adhesion molecules and normally ensure that cells remain closely linked to each other and the tissue.

However, in some tumor cells these molecules are no longer present, allowing the cell to move away from the tumor and enter the blood stream.

For normal cells, the loss of adhesion molecules results in their death. This mechanism helps prevent them from entering the blood stream. However, metastatic cells have developed mutations that allow them to survive without being attached by adhesion molecules.

In the Blood
Once tumor cells have successfully entered the blood stream, they face an entirely new challenge: surviving transit in the blood. Most cells, including tumor cells, are not designed to survive the stresses of the blood system.

One of the primary ways in which tumor cells survive this transit is by using platelets to act as shields.

Platelets are small blood cells that can surround the cancer cells and protect them from both the force of blood flow and attacks from immune cells.

Out of the Blood
Extravasation, or exit from the blood vessel, is the final leg of the tumor cell's journey through the circulatory system. In some cases, tumor cells, which are often larger than blood cells, get stuck in the capillary bed of a distant organ.

A capillary bed is the network of small blood vessels that are too narrow for the tumor cells to get through. Here they can continue to grow until they burst through the vessel. In other cases, extravasion is more specific. The changes in cell behavior that occur as cancer develops are, in part, dependent on changes in physical properties of the cells.  Some of the changes have been identified and may be used to identify cancer cells.

Tumor cells display a characteristic set of features that distinguish them from normal cells. These traits allow the individual cells to form a tumor mass and eventually to metastasize to other parts of the body.

We will briefly consider the changes that affect cell functions and then discuss some of the capabilities that must be acquired by the tumors as a whole to enable them to grow and spread.

A wide range of changes occur during the transformation of a normal cell to a cell capable of forming a cancerous growth. All cancer cells acquire the ability to grow and divide in the absence of signals that are normally 'turned on' and/or in the presence of signals that are normally 'turned off'. There are also detectable changes in the physical properties of the cells.

These changes include the following:

Cytoskeletal changes: The distribution and activity of components in the cell infrastructure, namely microfilaments and microtubules, may change. These alterations change the ways in which the cell interacts with neighboring cells and alter the appearance of the cells. Changes in the cytoskeleton also affect cell adhesion and movement (motility).

Cell adhesion/motility: The reduction of cell:cell and cell:extracellular matrix adhesion allows large masses of cells to form. As described in the section on cell division, cancer cells are able to continue to grow even when surrounded by other cells. The alterations in cell adhesion also impact on the ability of the cells to move. Cancer cells must be able to move and migrate in order to spread, and cell adhesion plays a major role in regulating cell movement.

Nuclear changes: The shape and organization of the nuclei of cancer cells may be markedly different from that of the nuclei of normal cells of the same origin. This change in appearance may be useful in the diagnosis and staging of tumors.

Enzyme production: Cancer cells often secrete enzymes that enable them to invade neighboring tissues. These enzymes digest away the barriers to migration and spread of the tumor cells.

Return to The Library
Posted in Cancer, The Library
← Cancer SucksWhat Is Nasopharyngeal Cancer? →